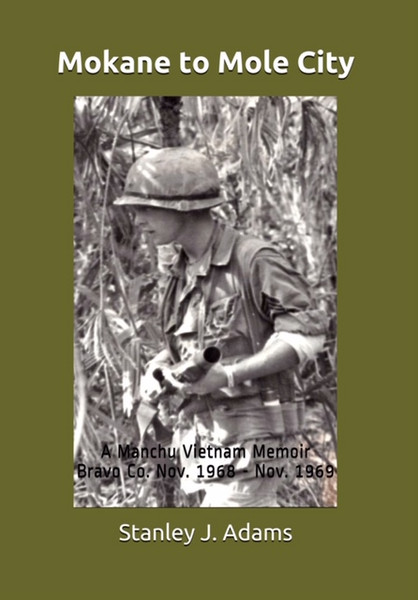 Drafted in May 1968, Stan Adams, barely 20 years old, was quickly transformed into an infantry rifleman on the front lines of the Vietnam War, where he survived a year of combat with the famed "Manchu" Regiment, 25th Infantry "Tropic Lightning" Division. Sent in as replacements for those Bravo Co. soldiers who were killed in the Thanksgiving Day Battle of 1968, Adams and his fellow soldiers were charged with building "Mole City," a combat patrol base camp near the Cambodian Border, to purposely bait the NVA and disrupt their supply lines through the region. He had been "in country" for less than a month when the NVA attacked Mole City during a Christmas truce, just before midnight on December 22, 1968. The Manchus fought valiantly through the night as their ammo supplies dwindled, and as a last resort, artillery was called in on Mole City. In 2003, Adams began reaching out the families of fallen comrades and reconnecting with his fellow Manchus, many of whom suffer some form of PTSD as a result of the horrors they experienced in Vietnam. As these surviving warriors age, they are now burying their Manchu Brothers. 50 years later, through a photographic history featuring 250+ color pictures, Adams recounts his journey from the rural Midwestern town of Mokane, Missouri to the jungles of Vietnam, sharing what it's like to fight - and not die - for your country.

Stan is the father of Lucky Snipe owner Kim Force. Kim worked closely with her parents to help bring her dad's story to life. She is honored to have assisted him, and we hope you will enjoy reading this very special tribute to those who gave so much in Vietnam.

AUTOGRAPHED COPIES AVAILABLE - select option above. Specific wording requests may be emailed to kforce@LuckySnipe.com or noted in the comments.

Check out local press on the author: